THE place for outdoor activities and watersports!

Fiscardo offers amazing hiking trails for you to explore!
There are three sign-posted trails of 4,7 and 10km. While walking these paths, one’s eyes can feast on the landscapes of the peninsula, as well as to discover the cultural secrets, that no car can access! These paths can be easily accessed even during the summer, since they are largely covered by dense shade, thanks to the forests of cypresses & pine trees.

“Fiskardo Divers” are qualified PADI instructors that will be by your side whether it’s your first or one of the many dives of your life. They will take you through theory, training and eventually dive along with you to explore the crystal blue waters of the Ionian Sea.

The course takes around three hours to complete and costs approximately 50 Euros. This includes 30 minutes theory, 30 minutes training, the trip on the dive boat and your dive in the sea!

If you require more details or wish to make a booking, please contact us.

Dive in the Ionian Sea

Hiring a boat is the ideal way for you to find your own secluded cove. Fiscardo offers several new boats to hire.

There are countless bays and coves which are not accessible by car, so it is highly possible to find your own secluded beach and relax in privacy, away from the crowds. Although there are plenty of small coves within easy reach of Fiscardo, the more adventurous seafarers might like to cross the channel to Ithaca, tie up in the miniature harbor of Ancient Polis and perhaps walk up to the village of Stavros for lunch or a coffee.

Another option would be to join one of the scheduled one day cruises: From the village of Agia Efimia, you can take the beautiful Ithaca Cruise or the 3-Islands’ Cruise. The cruises start at 09:00 and return around 18.00. Both cruises are a great way to see the nearby islands of Ithaca, Meganisi, Scorpios (the private island of the famous Aristoteles Onassis) and Lefkada. Ithaca is the island and birthplace of Odysseus. There is a cafeteria on board with drinks and snacks/sandwiches, so there is no need to take food or drinks with you. The boats of both excursions make a one and a half hour stop for lunch. The cruises run daily and you may contact us for more information.

Kayaking is another activity which you could enjoy at Fiscardo:

We launch from the secluded cove of Emplysi and we kayak south along the coast. After a while, we reach Fiskardo, a picturesque village that was left untouched by the 1953 earthquake. The traditional houses and the abundant signs of an aristocratic past make it simply unique.

We continue kayaking to Foki, a colorful little bay with crystal clear waters and a forest of cypress trees covering the surrounding slopes. After a while we reach the Evreti bay, where we paddle over 2 wrecked fishing boats and we stop for swimming, snorkeling and lunch.

After lunch we can either paddle straight back to Emplyssi or extend our paddling and visit the little islet of Dhaskalio, the Homeric ‘Asteris’ where Penelope’s suitors set up the ambush to Ulysses son, Telemachus. The best time to visit is during spring when the islet becomes a seagull rookery.

Finally we paddle back to Emplyssi beach.

At the lower level of our hotel, you may find Sabia luxury boutique that offers carefully selected items from every corner of the globe. From Italian leather bags, Asian silk shawls to French haute couture and beautiful local hand-made jewelry.

Our guests receive a 10% discount.

There also many other shops in Fiscardo from which you can select clothes, souvenirs, accessories and Kefalonian traditional delicacies.

Fiscardonna Luxury Suites operates its own Café - Restaurant Tselenti & our guests will get a 10% discount!

Café - Restaurant Tselenti offers an extensive menu and caters to all tastes, including all famous traditional Greek dishes such as Eleni’s homemade Moussaka and Soutzoukakia (Greek meatballs in a fresh, herby tomato sauce) using only the freshest local ingredients. There are also numerous salads as well as fresh fish of the day. At the end of your meal, choose among Eleni’s homemade desserts: apple pie with Baileys, fresh strawberry cheesecake, lime & lemon tart, crepes, ice creams and many more!

The evening menu changes and you will find even more tantalizing dishes. The elegance of the past can be captured in the ambience of the restaurant, which combined with exceptional flavors and music from around the world will make your evening a memorable one!

After the sun is set, the mood changes to one of romance and warmth. The bar has a D.J. with an extensive collection of jazz and rock music from the mid 50’s, including Rock & Roll, Urban rhythms and blues, to today’s alternative rock and Indie music.

The Tselenti building is a historic house that has been owned by the Tselentis family since 1893.

There is a great number of restaurants in Fiscardo offering local, Mediterranean and even Asian cuisine. Fiscardo tends to get very busy during the summer and we recommend to book a table for your evening meal.

Please contact our reception team to help you find the restaurant you wish and make a booking for you.

Faros (lighthouse) was built in 1892 and it’s just a few minutes on foot from the port of Fiscardo. The lighthouse has a height of 27m. Close to the lighthouse there is the old lighthouse which was built during the Venetian times.

In the north tip of the island, a special mention must be done for the Norman ruins. In a wild area, visitors may find the remains of a church, probably built in the eleventh century to house the tomb of Guiscard (the Norman leader who gave his name to the village of Fiskardo) and two watch towers with the foundations of a Venetian lighthouse.

The Nautical and Environmental Museum in Fiskardo is the result of various collaborative projects aimed at the preservation of the island’s natural inheritance, as well as the promotion of environmental awareness of the general public. Since its inception, the museum remains vital thanks to the continued cooperation of local authorities and devoted volunteers.

This small islet is located between Kefalonia and Ithaca. It is rumored to be the location where the suitors of Penelope (Odysseus’ queen), waited to ambush her son Telemachus.

Near the lighthouses there are the ruins of an old Byzantine church, dated sometime between the 6th and 12th century. Departing from our hotel it is about half an hour walk by the sea and under the shade of pine trees. 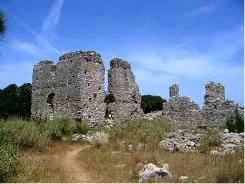 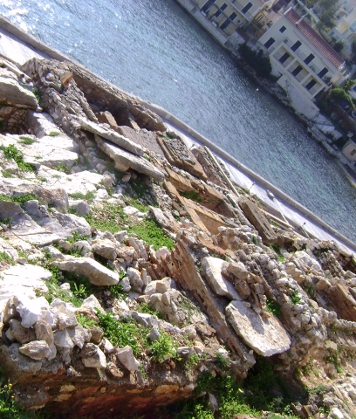 The Roman cemetery of Fiskardo was discovered in 1993 and dates back to the Christian era (II-IV century AD).

During the excavations 47 tombs were discovered and it is believed that the cemetery extends further even beneath the current coastal road.

Several types of tombs can be seen:

– rectangular tombs which include a pillow stone

– monumental tombs (actual rooms even with a stone door)

– sarcophagi (tombs made by a single piece of stone)

Many of the graves are family graves were whole families were buried together, and in some of them, several items have been found such as mirrors, earrings, bracelets, vases, coins and more. 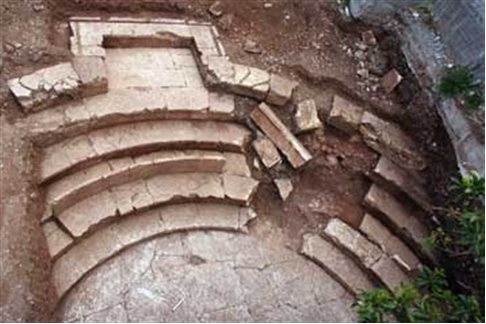 Don’t forget to visit the only roman theater that can be found in Greece located at the entrance of Fiscardo!

This roman era theatre and tomb were discovered in April of 2007. The tomb was full of jewelry, pottery and bronze offerings. This discovery is the first of its kind on an Ionian island and Greek experts believe that this may suggest a previously unknown route between the two ancient cultures of Greece and Italy. The find contains five burials, including a large vaulted grave and a stone sarcophagus.

The Associated Press reported that the archaeologists also found gold earrings, rings and leaves that may have been attached to ceremonial clothing, as well as glass and clay vases, bronze artifacts decorated with masks, a bronze lock, and copper coins.